This is a follow on post from Searching for the Geographical Origin which started the exploration of my own surname TIMMINS.  So far we have just considered the name as it is spelt now, ignoring the alternatives.  For this post I intend to continue down this path to see where in the UK that the name is most populous.  It is anticipated that this area will be the most likely origin of the surname.

In the last post we determined that three Poor Law Unions in the West Midlands had the majority of the surname distribution, that is TIMMINS living in the district, not those born there.  Out of the 2414 occurrences of the name 1580 (66%) are in the counties of Staffordshire, Worcestershire and Warwickshire; and of these 1136 (47%) lie in the Poor Law Unions of Dudley, West Bromwich and Stourbridge.  The largest cluster of 569 (24%) being in Dudley.

Now I want to find the birth parishes so we must first find the names of the locations that people would have given the Enumerators.  I covered some of this in a recent blog post British Settlements and the Census on my Ancestral Wormhole blog.

Using the book The Phillimore Atlas and Index of Parish Registers  by Cecil R. Humphery-Smith I drew a map showing the parishes that make up the Poor Law Union boundaries: 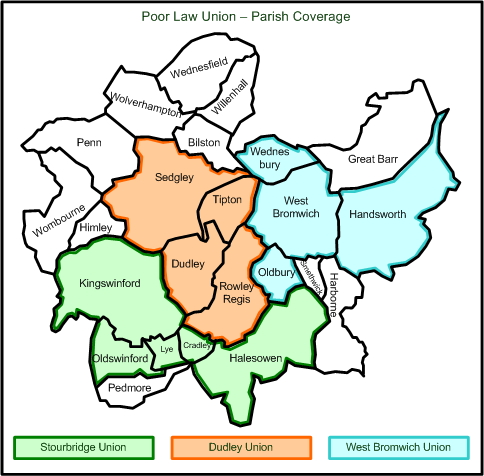 Another resource for investigating the boundaries in England for Parishes, Poor Law Unions and more is the Historical Maps area at FamilySearch.  Here you are able to see the Jurisdictions of 1851, then using layers over Google Maps you are able to view where the various boundaries existed.

The definitive web page for understanding the parishes within registration districts in the UK and Ireland is on the GENUKI web site, so from here lets get the list of parishes and townships that go to make up the districts.

For anyone researching the UK, from outside the UK, the GENUKI web site is a great place to start.

Using the list of parishes found in Genuki I entered them into the Find My Past web site one by one in the “Birth place:” field, with TIMMINS in the “Last name:” field (“Include variants” un-ticked), with all other fields blank.

Stourbridge Registration District or Poor Law Union is made up of the following places (parishes & townships) in 1881.  There are 188 TIMMINS’ resident in the district and 164 born here. The number in brackets after place is number born in said parish.

Dudley Registration District or Poor Law Union is made of the following places (parishes & townships) in 1881.  There are 568 TIMMINS’ resident in the district and 564 born here.

The number in brackets after place is number born in said parish.

West Bromwich Registration District or Poor Law Union is made of the following places (parishes & townships) in 1881.There are 379 TIMMINS’ resident in the district with 226 born here. TheNumber in brackets after place is number born in said parish.

ONS Statistics for 1881
To further clarify the above I decided to delve a bit deeper into the official statistics.  The number of people in the above are simply that, the number of  people with the TIMMINS surname recorded in that PLU.  So what if I look at the number of people with the surname as a percentage of the total population of the PLU.  Also lets look at the number density in relation to the area in acres.  I rated each of the three types of stats from 1 to 630 (630 being the no of PLU’s) then extropolated the results into an average rating.  The results are in the table below.

Comments on the Results from the ONS Stats:

So what can we determine from this exercise?

3 thoughts on “A Midlands Origin for the TIMMINS Clan”