This blog post is a re-work of an article I originally posted on my Ancestral Wormhole blog. Since I am now a member of the Guild of One Name Studies I decided to re appraise this article and add some new findings.

I originally thought it would be easy to research my TIMMINS surname – but how wrong can you be?  There are a large number of books and on-line articles speculating on the origin of the TIMMINS surname and the location it evolved from.  Not surprisingly they don’t all agree!  There are also the variant or deviant spellings like TIMMONS and TIMMS (and many others).  I have made the decision at this early stage of the study to concentrate solely on the TIMMINS name and put the variants/deviants to one side until I have a better grasp of the project.

First I want to look at some concrete information on where the surname may have come from – the 1881 census of England and Wales  looks like a good place to start – or is it?    Doing an exact name search on Find My Past produced 2,335 matches.  The same search on Ancestry gave 2,391 whilst on FamilySearch I got 2,337 matches.  I chose the 1881 census as I presumed that all the transcriptions would be identical, also the Guild uses the 1881 as a base line to decide the size of the study.  So based on the number of surname matches this study is classed as a Medium by the Guild.

In addition to the above Ancestry was able to give a little more information as it also looks at the Scottish census – this added a further 62 names to the mix (new Ancestry total 2453).  Since I first produced this post Find My Past have also added Scotland, 84 names in fact, which also disagrees with Ancestry!

Just to give a wider perspective to the surname numbers and coverage I checked other census years and other geographies.  The table below shows the results, together with the sources of data. 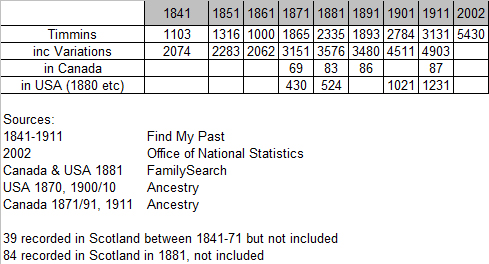 You would think that computer databases these days could come up with precisely the same answer to a simple query.  Perhaps someone out there in blogger land can explain the differences.

To find the origin of a surname you really have to understand where a person was born rather than where they lived when the census was taken.  Another factor is that you need to look at the older people in the census as this this will give a view of what was happening to the population prior to the mass migration caused by the Industrial Revolution.  This is now starting to look too complicated a search for the likes of the usual suspects i.e. Find My Past, Ancestry and FamilySearch.

So come to the rescue rootsmap.com .  This is an on-line paid for service that provides a map and data matching the criteria I mentioned above.  So here we have it, with the added bonus of Scotland.  Note that if you click on an image you will get a higher resolution view. 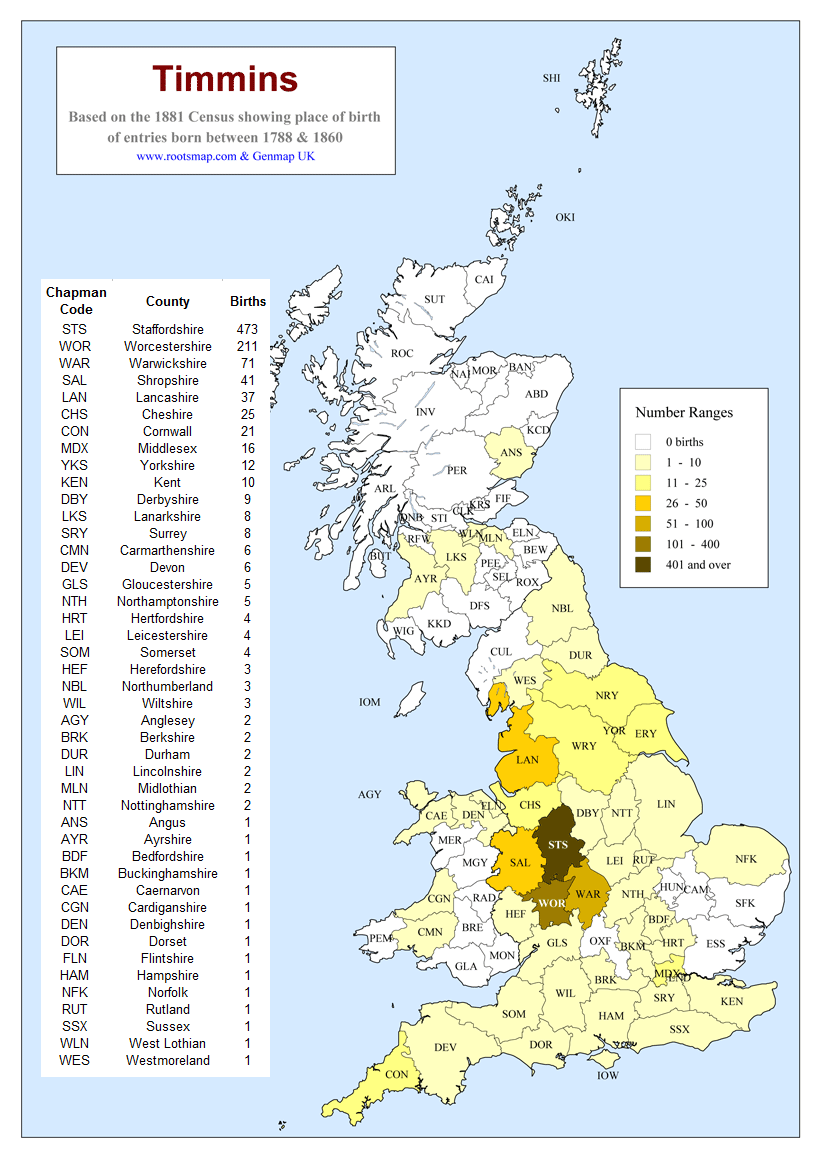 An advantage of the rootsmap.com web site is that it can also determine if there are any surname matches in Ireland; it uses the Griffith’s Valuation 1847 -1864 to achieve the results.  Unfortunately my TIMMINS surname is not currently in their database.

I have other options to find out any Ireland/Eire Timmins’:

The Irish Times site is by far the best resource for searching any potential Irish surname connection.  So from the Irish Times:

The top 4 counties in Ireland for the Timmins surname are:

Surname and alternative numbers are:

Other alternative name given are:

Leaving Ireland behind for a while I need to look at the more dense population of Timmins in the West Midlands (Staffordshire and Worcestershire) to see if I can narrow down the parishes they frequented.

I just happened to glance up at my CD genealogy collection and spotted a programme that I had forgotten about – Surname Atlas by Archer Software – I purchased it back in 2003, this is exactly what I need.

“The British 19th Century Surname Atlas is a fully interactive CD-Rom product that allows you to plot floodfill-style distribution maps for all of the surnames and forenames found in the 1881 census of England, Scotland and Wales.”

So I run the software and get 2,414 matches, not quite as many matches as Ancestry?  But here we have the Counties that I am interested in together with the data. 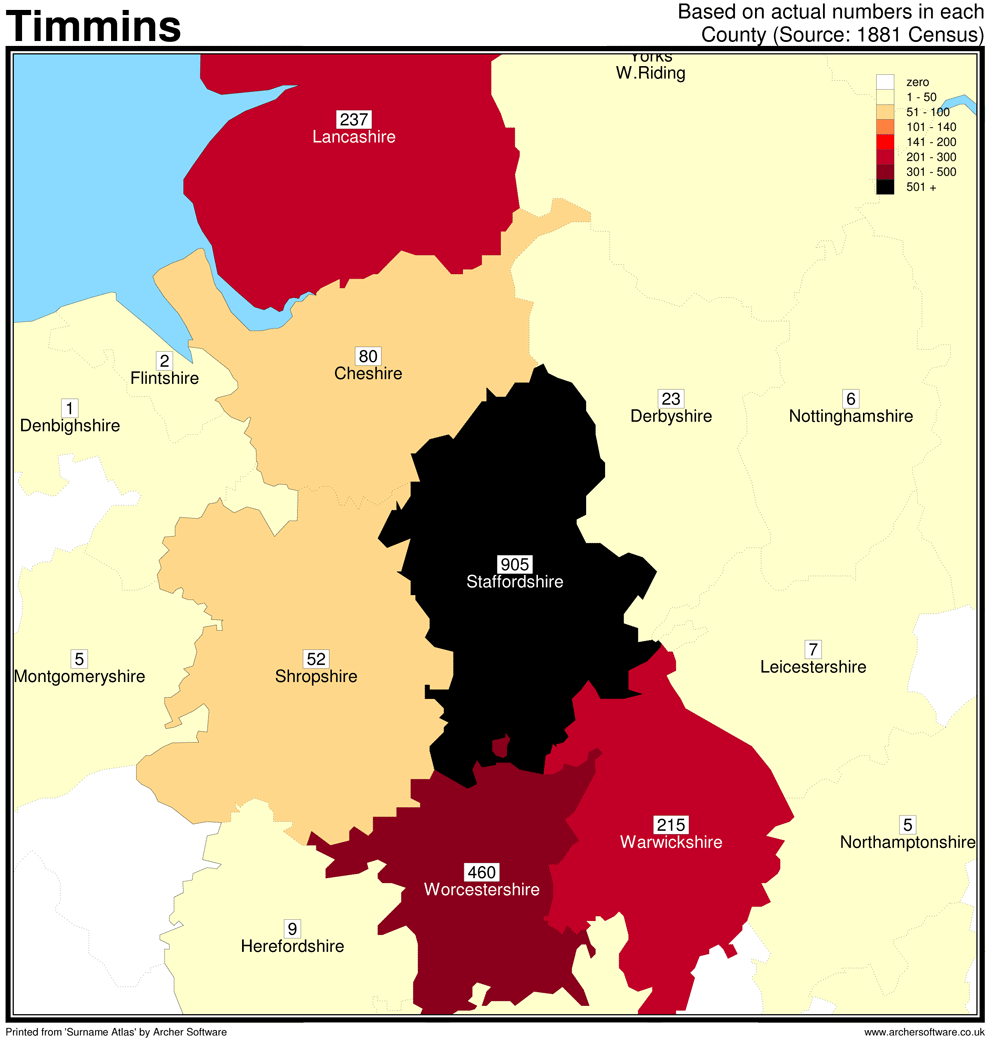 The density of Timmins’ in the Dudley Poor Law Union would appear to indicate that the surname could have established itself here at an early stage.  More investigation into this will follow in my next blog post.

Just as I thought that I had finished another thought popped into my head “Google British Surnames”.  Yet more information……………… rather than copy and paste it here I will let you click on the links and explore my surname further at these web sites.  In fact why not explore your own!

gbnames – the Great Britain Family Names Profiling website which presents the findings of a project based at University College London (UCL) that is investigating the distribution of surnames in Great Britain, both current and historic.

britishsurnames –  The British Surnames website. Here, you can find information on similar surnames, most common surnames, surname meanings and etymologies as well as discussing your name in the forum.  As the name suggests, this site primarily lists surnames commonly found in Britain, but many of these are found in other parts of the world as well – so even if you’re not British, your name could well be in here!

americansurnames – See how the name has spread.

canadasurnames – There is a town named Timmins in Ontario Canada – the following is courtesy of wikitravel, also see wikipedia

Thanks for taking the time to read this, I hope you found it interesting.  Please leave comments below, or you can email me direct.

3 thoughts on “Searching For The Geographical Origin”