Skip to primary content
Skip to secondary content
A Grave from the HAYES of Chester in my Family Tree
I found this headstone early on in my family history research, it was a great find as it opened lots of other doors and enabled me to discover much more information about my HAYES line. The data which led me to the headstone was on a microfilm held by the now defunct Chester Record Office (now part of the Cheshire Record Office).  I spent hours perusing these microfilm records extracting likely candidates for matches to my then small family tree.  Now a days you can easily search the Overleigh Cemetry records on-line!  The details of the 5!! people interned in this particular grave can be found HERE.
Old Cemetry No2, Overleigh Road, Chester.  Grave Number : R8000 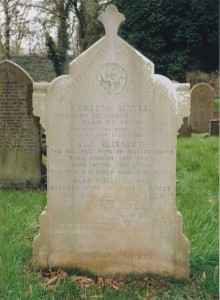