With proud thanksgiving, a mother for her children,
England mourns for her dead across the sea.
Flesh of her flesh they were, spirit of her spirit,
Fallen in the cause of the free.

Solemn the drums thrill; Death august and royal
Sings sorrow up into immortal spheres,
There is music in the midst of desolation
And a glory that shines upon our tears.

They went with songs to the battle, they were young,
Straight of limb, true of eye, steady and aglow.
They were staunch to the end against odds uncounted;
They fell with their faces to the foe.

They shall grow not old, as we that are left grow old:
Age shall not weary them, nor the years condemn.
At the going down of the sun and in the morning
We will remember them.

They mingle not with their laughing comrades again;
They sit no more at familiar tables of home;
They have no lot in our labour of the day-time;
They sleep beyond England’s foam.

But where our desires are and our hopes profound,
Felt as a well-spring that is hidden from sight,
To the innermost heart of their own land they are known
As the stars are known to the Night;

My Grandfather John Henry WILLIAMS (1875-1925) survived the Great War (WW1), but what he saw and what damage it did to him I will never know! 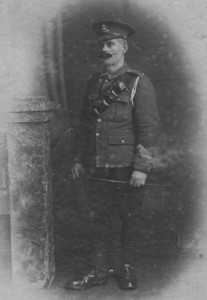 “Never in the field of human conflict was so much owed by so many to so few.” – Winston Churchill

This photo is from the early 1940’s, it is the “Williams Girls” outside what looks like Hoole All Saints Church, I don’t know what the occasion is but most likely a family wedding.

If you have been following my blog you will know that my mother Hilda came from a large family, eleven in total, eight girls and three boys.  This is the only photo I know of that shows just the girls.

Gertie (born 1900) was the second child but the eldest daughter, Lorna (born 1924) was the youngest in the family.

One of things I like to do is list the married names of my female family members, this helps any cousins to find me if they Google their parents/grandparents names. So in no particular order the Williams Girls married names are – Timmins, McDonald, Monkman, Griffiths, Cowmeadow, Jones, Wilcock, Hales.